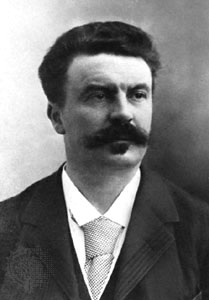 Guy_de_Maupassant
Henri René Albert Guy de Maupassant (5 August 1850 – 6 July 1893) was a popular 19th-century French writer, considered one of the fathers of the modern short story and one of the form's finest exponents.
A protégé of Flaubert, Maupassant's stories are characterized by their economy of style and efficient, effortless dénouement. Many of the stories are set during the Franco-Prussian War of the 1870s and several describe the futility of war and the innocent civilians who, caught in the conflict, emerge changed. He also wrote six novels.
I am going to post here "Ghair Qanooni Mashwara (Illegal Advice)" one of his translated short stories. I hope you will like the story. Here you go!!