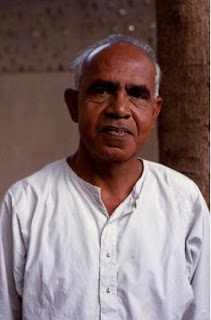 Muhammad Hasan Askari (Urdu: محمد حسن عسکری) (1978–1919) was one of the most respected name among scholars, critics, writers and linguists of modern Urdu. He was an important voice within the modernist movement.

Askari was born on November 5, 1919 in a village in Bulandshahr District, in western Uttar Pradesh, India. He joined Allahabad University as an undergraduate in 1938 and went on to earn a Master’s degree in English literature in 1942. After completing education, he joined All India Radio, Delhi. For a brief period around 1944, he also taught English literature at Delhi College (now, Zakir Husain College).

After independence, he and his family migrated to Pakistan and finally settled in Karachi in 1950. He joined Islamia College Karachi. By 1955 Askari became increasingly engaged in the transition to and formulation of Pakistani national culture, practically abandoning his previous work that had focused on discussions of style in Urdu language and literature.

Jadidiyat is one of his premier work. He translated western literary, philosophical and metaphysical work into Urdu, especially from English, French, and Russian. He translated Lenin's State and Revolution in 1942 and Maxim Gorky's work, main ne likhna kesay sikha in 1943. He also translated Arabic mystic literature and Buddhism into Urdu. In his later part of life, he went against the Progressive Writers’ Association on account of its sole dependency on Socialism. He was the first who introduced René Guénon, Frithjof Schuon and Martin Lings to Indian and Pakistani Muslims. Preceding his death, he was working on a translation of the Quran and finished a little more than one chapter before he passed on.