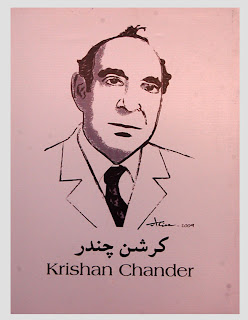 Krishan Chander (November 23, 1914 – March 8, 1977) (Urdu: كرشن چندر) was an Urdu and Hindi Afsaana Nigaar, or short story writer. He wrote mainly in Urdu, but was well-versed in Hindi and English.
He was a prolific writer, penning over 20 novels, 30 collections of short stories and scores of radio plays in Urdu and later, after partition of the country, took to writing mainly in Hindi.
He also wrote screen-plays for Bollywood movies to supplement his meagre income as an author of satirical stories. Krishan Chander's novels (including the classic: Ek Gadhe Ki Sarguzasht, (The death of a donkey) has been translated into over 16 Indian languages and some foreign languages, including English.

Krishn's Introduction by Kitaab Ghar
His short story Annadata { trans: The Giver of Grain - an obseqeuious appellation used by Indian peasants for their feudal land-owners }, was made into the film Dharti Ke Lal, by Chetan Anand in 1946 - which led to his being offered work regularly as a screen-writer by Bollywood, including such populist hits as SHARAFAT, 1970.
About his place of birth Krishan Chander wrote: 'Lahore is a place where I was born, where I was educated, where I started my literary career, where I achieved fame. For people of my generation it is difficult to forget Lahore. It shines in our heart like a jewel -- like the fragrance of our soul'.* Krishan Chander spent his childhood in Poonch, in the state of Jammu & Kashmir, where his father worked as the physician of Maharaja Poonch. His two famous novels Shakast (Defeat) is related to Kashmir's partition. Mitti Ke Sanam one of his most popular novel is about the childhood memories of a young boy who lived with his parents in Kashmir. His famous AFSANE (short stories) are the stories of Kashmiri villages, as well as those of displaced expatriates and rootless urban man. He used Pahari (dialect of people living in Poonch) words while writing in Urdu. He was against the Hindu-Muslim conflicts - and might actually have been an atheist, as he was a committed Communist & card-carrying Party Member - as many radical writers in India were in the decades immediately preceding the Partition of the country. The forcible division of Kashmir in 1948 after the creation of India and Pakistan left deep marks on his writings. 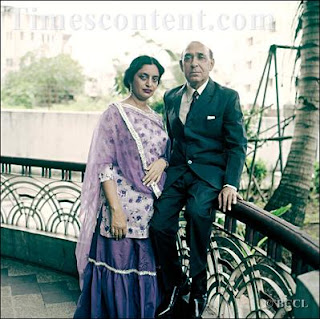 With His Wife
His literary masterpieces on the Bengal famine and the savagery and barbarism that took place at the time of the partition of India in 1947 are some of the finest specimens of modern Urdu literature, but at other times too he continued relentlessly to critique the abuse of power, poverty and the suffering of the wretched of the earth; but above all he never stopped protesting casteism, fanaticism, communal violence and terror. He was a humanist and a cosmopolitan.
Krishan Chander died working at his desk in Mumbai on March 8, 1977. He had just started to write a satirical essay entitled Adab baray-e-Batakh (Literature for a duck), and wrote just one line 'Noorani ko bachpan hi sey paltoo janwaron ka shaukh tha. Kabootar, bandar, rang barangi chiriyaan…' (Since childhood Noorani was fond of pet animals such as pigeons, monkeys, multi-coloured birds…') but before he could complete the sentence he succumbed to a massive heart attack.
A Fountain Park in [Poonch] City of J&K has been renamed as Krishan Chander Park Poonch in his loving memory. His statue has also been erected in the middle of the Garden. 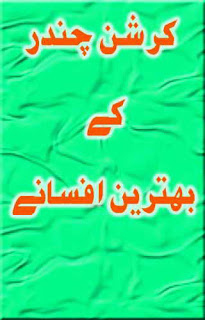 Kitaab Ghar has published selection of his short stories entitled Krishan Chander KE Bahtareen Afsanay as an E-Book.
The book is, at the time, available only for online reading but soon will be available for downloading and offline reading.
Please click here to go to the book and read it online. You can there find many other books in Urdu literature. I m sure, you will enjoy reading it.
Best wishes!!!
Posted by Israr Ahmad at 4:01:00 AM