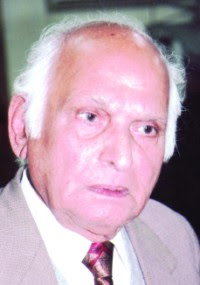 Intizar Hussain
Intizar Hussain, (Sitara-e-Imtiaz), is eminent living Urdu fiction writer, who has a wide readership across the globe. He was born on December 7, 1923 in Dibai, Bulandshahr India but migrated to Pakistan in 1947. He did his masters (M.A.) in Urdu and later on in English literature. He writes short stories and novels in Urdu, and also columns for newspapers in English.

Intizar Hussain has developed a unique prose style and is known for his nostalgia for older places and phenomena. He has received many awards from Pakistan, India and the Middle East.

The Seventh Door, Leaves are some of his books translated into English. He has translated from English to Urdu. His few prominent writings are "Hindustan Se Aakhri Khat" , "Agay Samander hai", "Shehr-e-Afsos" & "Wo Jo Kho Gaye". His wife died in 2004. He also writes literary article in Dawn. He started his careers from newspapers and became a part of Mashriqe newspaper. He doesn't have any children.

His novel Basti
Intizar Husain came into prominence with the upheaval filled days of 1947, as the emergent country of Pakistan was affected by the displacement of people on both sides of the border. These became the themes of Intizar Husain’s early fiction writings and his concern with the destiny of this country has deepened in his subsequent work.

Intizar Husain is a well recognized figure on Pakistan’s literary scene and many of his works have been translated into English.
Posted by Israr Ahmad at 5:27:00 PM